The AOC (Appellation d’Origine Contrôlée) is a brand which guarantee the type and the authenticity of its geographical origin. It is associated to the notion  of “Terroir” literally the “earth” ie identity and characteristics of a local, well-defined area with its own geology, farm practice, climate and techniques. As with wines, these characteristics determine the identity and personality of the cheese.

Cantal is a dry rind cheese, made from cows milk, firm, pressed and non-processed. It is sold in “wheels” weighing 35-45 kg and 36-40 cm in diameter. The three Cantal AOC’s exist differing in their maturation or ripening period : Cantal jeune (young, minimum 1 month’ maturation), Cantal entre deux (between the two, 2-6 months) and Cantal vieux (old, more than 6 months maturation).

Salers is the ancestral form of Cantal and was formerly made in the burons (the ancient estive building) during the estive, ie the summer transhumance to the mountains. Although a few burons are still functioning, Salers is now made on the farm, but while the cows are grazing the estive pastures.

Thus the fabrication of Salers cheese takes place only when the cows are out to grass, that is between the 15th of April and 15th of November. It must take place “in situ” twice a day after each milking.
The maturation lasts a minimum of 3 months but can be prolonged to 1 year depending upon the flavour required. Salers, as with Cantal, is a cheese with a dry rind. However, in contrast to Cantal, the raw whole milk must be processed on the farm, immediately after milking. It is a pressed non-processed cheese. After maturation, Salers cheese wheels weigh between 30 and 50 kg and about 400 litres of milk is necessary for each one. Salers is not necessary made from milk from Salers cows, a large part of the fabrication is from other milk breeds.

Details of the Association “Tradition Salers”

The Association Tradition Salers, since 1991, consists of farmers of Auvergne who use the traditional system. The objectives are :

Tradition Salers is thus a cheese made 100% from Salers cow milk !

This system involves the dual production of cheese and a semi-suckled calf (in local terminology, a “veau maigre” : literally a thin calf). To milk a Salers cow adequately, the presence of the calf is necessary throughout the lactation. The calf gets milk for 3 months, then is at grass. Effectively, as the milk yield declines, the amount left for the calf to suckle declines. Thus about the same quantity of cheese is produced during the lactation.

The milking routine is very characteristic since the Salers cow doesn't let down its milk in the absence of the calf. Thus, at milking, the calf (kept separately otherwise) is led to the mother to suckle a few minutes, this triggers the hormonal response for milk “let down”. It is then attached to the left fore-leg of the mother to allow milking. During the first months of lactation, one entire quarter is left for the calf. The calf then has to be happy with the strippings. In this system, the calves cannot be expected to have the finish of a fully-suckled calf, hence the term “veau maigre” or “thin calf”, they take longer, as heifers to mature.

1- From milk to cheese
During milking, the milk is placed immediately in a large wooden vat or “gerle”. The wood conserves the natural flora of the milk.

The cows are milked twice a day morning and night. In summer, production is around 10 litres/cows.
Only one cheese can be made therefore from a herd of 40 cows. The milk is untreaded and whole although the cream can be partially newoved in to 2010.

It takes at the final step by :
- an identity mark defined by law
- by an imprint in relief on one side of the cheese which carries the raw of the cheese (twice)

Salers cheeses made 100% from Salers milk carry in addition an imprint in relief saying "tradition Salers" put compulsorily in place at the final stage. In addition, inked material or muslin with two opposing cows heads, is put on the side of the cheese before sale. This allows the producers to highlight their products. 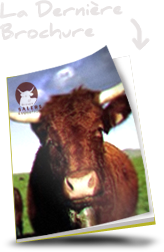