The breed standard was defined for the first time in the 1900’s, it was fixed for the breed  in the Cantal, on one hand for the traditional milk-weanling system, on the other for a milk-fed veal calf.

Today, suckler systems predominate which justified a revision of the points system in 1981. The standard is thus appropriate for the present systems and provides a basis for the genetic improvement programmes. The standard was revisited in 2002 to adopt it for the present and future markets.The Salers standard is adapted to the breed orientations and provides a foundation for the genetic improvement programme. 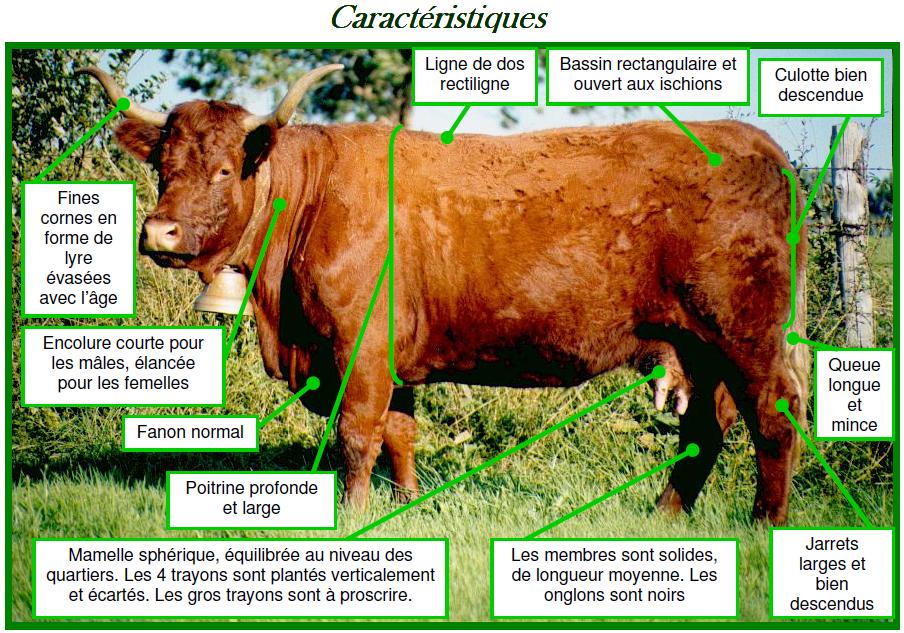 The hardy rustic qualities of Salers have developed over time. Formely used as draft animals as well as participants in transhumance, the Salers of today can easily move around to make good usage of extensive pastures. Its history has shaped its legs and feet. With black hooves and good legs, the Salers will tackle any area whether rocky or wet without lameness. She can also tolerate very long periods tied up or on slats during the winter.
Salers can thrive in difficult climates and do not fear wide temperature variations (from -15°  to 30  ° C), which allow them to graze on the high “estive” (summer) pastures of the Massif Central. In addition, the brown skin colour avoids teat abrasions and eye infections.

The mahogany coat colour and the rustic qualities of the breed ensures excellent heat-resistance. This is why the breed has been able to cope with conditions in Texas and Portugal (+30°C). But the long curly coat ensures that Salers are equally capable of resisting cold, harsh winters as their presence in the Rocky Mountains, Canada and Russia (-20°C) attests.

Salers are capable of mobilising their body reserves during hard times and can thus maintain milk production for their calves. The body reserves are rapidly reconstituted when grass supplies are renewed. This is “the concertina” effect which is very marked in Salers. The breed is thus very adaptable to difficult periods and can maintain milk production when other breeds shut down. The breed is suitable for both extensive and intensive modes of production.

The maternal qualities of Salers guaranties the production of a heavy calf per cow per year without supplementation and without much attention. The calving interval is 376 days. The length of gestation is 280 days. All this means that unproductive spells are reduced to a minimum.

Salers are capable of living well past 10 years and the breed is champion in terms of numeric productivity (ie number of calves weaned during the lifetime of a cow.)

The major asset of the breed is its ability to calve easily (without assistance). Thanks to a pelvis only slightly inclined but above all to its unequalled pelvic aperture, Salers have very few calving problems. Calf weight is also modest (circa 38 kg).
Even when crossed with heavily muscled beef bulls, calving remains easy. The Salers UPRA are unaware of any survey which does not rank Salers n° 1. The easy calving has consequences : ie increased longevity, rapid return to heat and less vet’s bills.
“Sleep well – breed Salers” is an appropriate slogan. “The Suckler cow of the third millennium” it is called by farmers assured of worry-free calvings, summer as winter. In addition, Salers are very maternal and watch and protect their calves.

In the traditional system, that is when the cows are milked for cheese production (5%); Salers produce up to 3000 kg of milk per year. The milk is exceptionally suitable for cheese production. There are several nationally recognised varieties of Auvergne cheese : Cantal, Salers et Saint-Nectaire.However, the Salers are mainly used in suckler systems where the milk capacity of the breed means the farmer does not need to creep-feed the calves. This makes the Salers the best milking suckler cow!

Heavy weanlings without supplementary concentrates
With pure-breds, DLWG is between 1000/1100 grams per day for bull-calves and between 900/1000 grams for heifers. These growth rates mean a minimum weanling weight of 320 kg for bulls and 300 kg for heifers calves without creep-feed on most farms, this is exceeded easily. The mother’s milk suffices.
When crossed with a beef breed, average growth is improved by about 100 grams per day compared to purebreds.

The bull weanlings produced are in good demand by feeders to produce “taurillons*”. Their early maturation, the meat colour and marbling are recognised and appreciated by the meat trade.